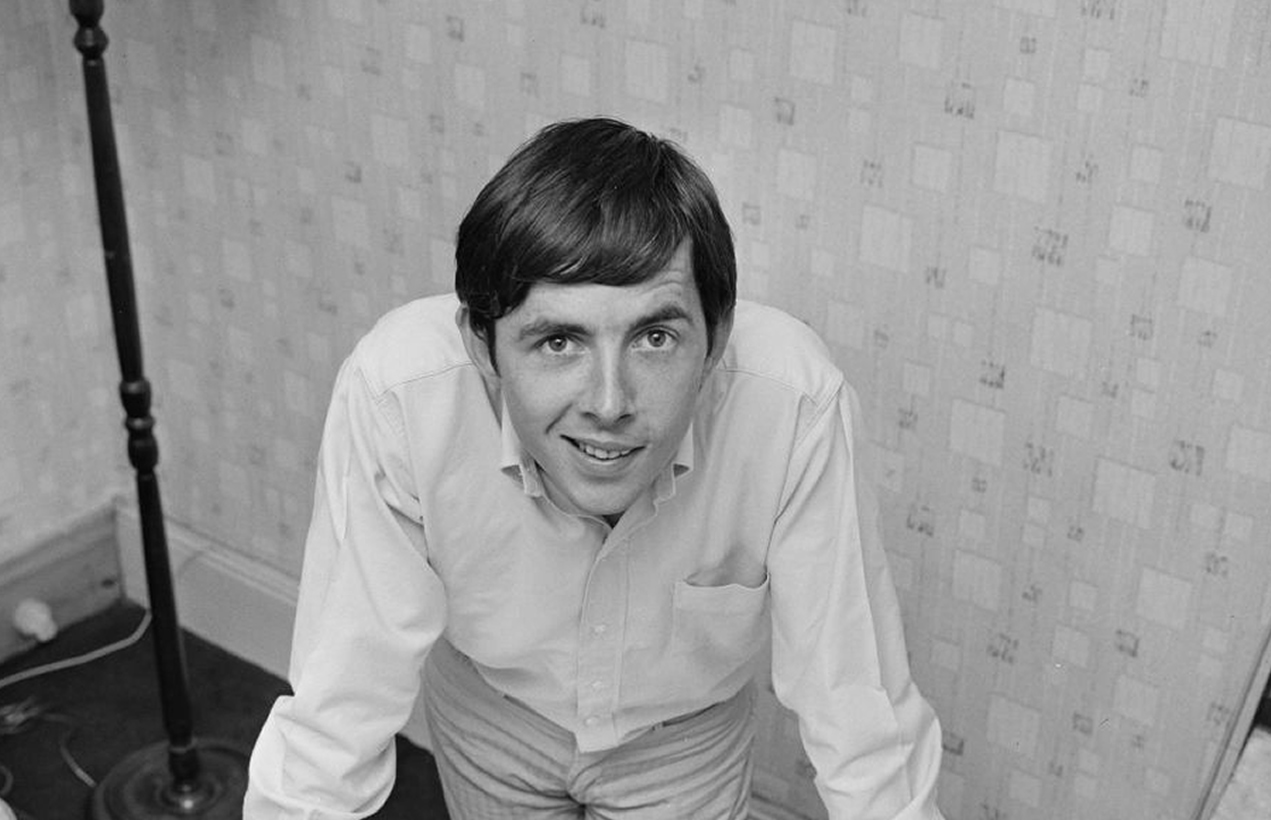 With a lot of time on my hands over the last few months, I’ve been staying up late and binging ‘Man About The House‘.

I watched all of ‘Lou Grant’, ‘Parks & Recreation’, ten seasons of ‘Smallville’. I’m up to season four of ‘Schitt’s Creek’. Watching ‘Au Pair Girls’ to talk about it for David’s Project Fear blogathon led me back to Richard O’Sullivan’s best known work, and I’m hooked.

Consequently, I’ve taken to singing Noël Coward’s ‘Mad About The Boy’ but changing the words to make them about Robin Tripp, O’Sullivan’s catering student in the evergreen ITV sitcom. 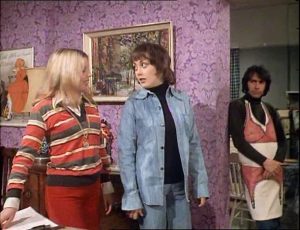 Binging on Tripp, something about the long-suffering cut of O’Sullivan’s jib reminded of literary critic Harold Bloom, who shuffled off his mortal coil last year. The guy who hit on Naomi Wolf when he was her tutor, and claimed audaciously in one of his major works that everything that could ever be experienced emotionally by any person had already occurred in the works of Shakespeare, was described by another of his former students, Wendy Moffat, as “a leonine, melancholy presence” who gave “an air of almost dissipated exhaustion when he was listening”. 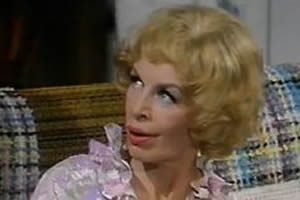 I realised, on reading this, that it could easily be a description of Robin Tripp’s reaction when Yootha Joyce’s Mildred saunters into his flat in a skimpy night thing, to complain once again about George’s failure to erect a bookshelf successfully (while Robin has to keep an eye on his soufflé). Also, Robin’s nest (I mean his hair) looks like Aslan the lion’s mane (‘Aslan About the House’?) so maybe that was the connection in my mind? I forget, to be honest. 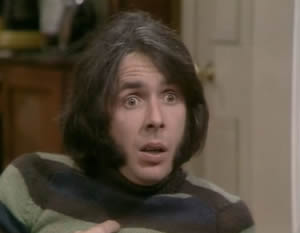 These thoughts, in turn, led me to a startling revelation, or rather the revelation of a question: could the cycle of O’Sullivan’s ITV comedies from 1973 to 1981 (‘Man About The House’ and ‘Robin’s Nest’), when viewed as a sequence, constitute a dense text commenting on the human condition, much as Bloom posited was the case with plays of William Shakespeare?

Probably not. But I’m in way too deep to disembark from this train of thought now, so bear with me.

We begin with birth. Or, rather, with a rebirth.

The young man with the horn in ‘It’s Great To Be Young!‘ (and perennial rogue John Mills should know!) had a stint hanging around youth clubs with Cliff and the Shadows. Then he grew up to be the son of John Le Mesurier, aka Mr Wainwright, in ‘Au Pair Girls’. Nobody emerges from the film with anything like dignity.

Poor John Le Mesurier, who has almost as much to lose as director Val Guest. Le Mesurier had an horrifically complex love life. By 1972 he’d been divorced, had married Hattie Jacques, divorced Hattie Jacques, married Joan Malin on the rebound, only for her start an on-again/off-again affair with Tony Hancock, before Hancock moved to Australia and then committed suicide in Sydney in 1968. This may have been made worse as result of Le Mesurier’s alcoholism and – according to Jacques – heavy cannabis use. Equally, this may also have made his romantic life more bearable.

To compound matters, 1971 had been a good year for Le Mesurier as an actor. He’d starred in Dennis Potter’s BBC TV play ‘Traitor‘ as a character based on spy Kim Philby. By the next year he’d hit rock bottom again, by being in what amounts to an instruction manual for toxic British masculinity, Seventies style.

No wonder, with John Le Mesurier as a role model, his son played by O’Sullivan – Stephen Wainwright – throws himself impulsively into a fling with au pair Randi Lindstrom (see what they did there?) who’s played by Gabrielle Drake. Stephen is working for his dad in one of the businesses which dominated Britain in the Seventies. The nature of their trade is nebulous. It seems to mostly involve proximity to dark wooden office furniture. Quite how this contributed to the British economy remains unclear, almost half a century later. With full Brexit now less than a week away, we are in the UK free to resume a socially-distanced version of whatever business it is Wainwright and son are engaged in, along with reinvigorated Cod Wars.

With the failure of his brief involvement with Randi to blossom into anything more enduring, Stephen Wainwright leaves for London, putting romantic failure and his father’s ideations of workplace sexual harassment behind him. He changes his name hastily and enrolls at a London polytechnic, with a view to becoming a professional chef.

As much as he may wish to escape the suffocating conformity of the permissive society to concentrate on his frittatas, fate has other plans for “Robin Tripp”.

And so we race through a second childhood and adolescence, much as – in the three years from 1973 to 1976 in which six series of ‘Man About the House’ were broadcast – Britain raced pell-mell for the cultural high ground of 1977: Punk, disco and ‘Star Wars’; tuning out the recent memories of the Winter of Discontent, pub rock and leather aviator jackets once it hit dry land.

There is much which can and should be said about Paula Wilcox and Sally Thomsett in ‘Man About the House’. Just as much could be said about O’Sullivan’s performance, and those of Roy Kinnear, Bella Emberg, Dennis Waterman and the host of other formidable actors who make guest appearances. Unlike any other TV show, since ‘Lost In Space’ was stolen week after archly camp week by the Robot and Jonathan Harris’s Dr Zachary Smith (Harris was the only actor in American television during its run who got to write his own lines), ‘Man About the House’ belongs not to its stars but to the second bananas, to Mildred, and to a lesser extent to George. Robin Tripp is, once again, eclipsed by a charismatic but dysfunctional parent, albeit a surrogate one this time.

On rewatching 1963’s ‘Sparrows Can’t Sing‘, as many have with the sad passing of its star, the great Barbara Windsor, few would pick out Yootha Joyce and Bryan Murphy from the collection of Joan Littlewood’s acting troupe as being a natural couple. Yet there is an unavoidable logic to it, with Joyce’s commanding presence at its core.

She had past form as a stand-in parent in a family with the wrong members in control. “That, perhaps, is as near as one can come to describing England in a phrase,” as Orwell observed.

Alongside Dirk Bogarde in 1967’s ‘Our Mother’s House‘, her miscued sexuality as an adoptive mother to a family of stranded kids is a premonition of the Establishment’s miscued use of violence to stamp out student protests the following year in Grosvenor Square. All the youth leaders wanted in 1968, it turns out, were the same publishing deals and tax avoidance schemes that their parents’ generation had benefited from.

It’s hard to now imagine the time when she wasn’t regarded as a quintessential and iconic English sex symbol to rival Babs and Diana Dors, before the Smith’s 1986 single cover for ‘Some Girls Are Bigger Than Others‘ on which Joyce features in a still from the John Boorman directed Dave Clark Five starrer ‘Catch Us if You Can‘.

With the allure of a rare and endangered creature, a satyress, her performance in ‘Our Mother’s House’ adopts the gender fluid truth of Sontag’s note on camp from three years earlier, “what is most beautiful in feminine women is something masculine”. In ‘The Pumpkin Eater’, also directed by Jack Clayton, she channels the kind of frustration and chaotic energy we see later in ‘Man About the House’ and ‘George and Mildred’, in her one scene, which she steals from Hollywood icon Anne Bancroft. 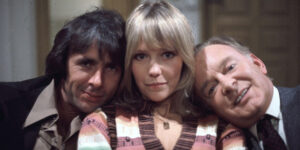 It seems that Robin’s lot is always to be upstaged by a replacement parent, unable to break out on his own even when Tripp runs his own bistro. The intertexuality of ‘Robin’s Nest‘ – the producer’s chose to make it a continuation of ‘Man About the House’ – includes the casting. Although Tony Britton wasn’t Tessa Wyatt’s father, Wyatt and O’Sullivan were a couple offscreen. George Layton, who wrote ‘Robin’s Nest’, is the other phantom thread connecting Bogarde to O’Sullivan, by way of the ‘Doctor‘ series based loosely on the earlier films and Gordon Stanley Ostlere’s books on which the Bogarde films are, in turn, based. 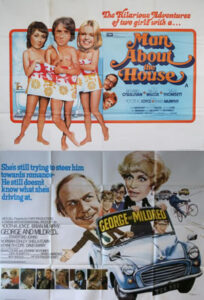 (The less said about the ‘Man About the House‘ film the better, besides the passing observation that it ended a sequence of Hammer films adapted from radio and television formats that went back to a 1948 Dick Barton movie, and which in its time had provided us with two half-decent Quatermass films. The ITC produced ‘George and Mildred‘ film of the spin-off TV series which appeared in theatres a week after Joyce’s death and then on TV screens weeks later has a unique position in British cinema in being cited as the broken link in the chain of automatic TV-sitcom-to-film adaptations. Hence, no ‘Robin’s Nest’ film. Though we can speculate how Robin Tripp’s business may have responded to the heightened political tension in West London following the Brixton riots.)

O’Sullivan described himself in the Nineties as a “hard-drinking depressive” and has suffered a number of health problems over the last decade and a half, although many of his former co-stars remain close. How can we imagine Tripp’s response, a father of three in his Seventies – possibly a grandparent too – to the world of new Covid-19 strains and Brexit, which unmake the world where a young catering student could afford to live – platonically or otherwise – in South Ken with two attractive women, or to turn a Chinese takeaway into a bistro? A lens through which we could glean his thoughts is provided by his author in ‘Robin’s Nest’, the erudite and ever-engaging George Layton, now also a widely respected prose author.

‘This policy and reverence of age makes the world bitter to the best of our times’ Gloucester says, reading Edgar’s letter in ‘King Lear’. As I ask elsewhere, in my book ‘What Is Crouching And Why Does It End?’ (£4, suit you sir/madam):

What moment in time during recent English history is it that the unsorted wing nuts of Brexit wanted to return to, besides comforting selective memories of their misspent youth? It can’t be before the end of World War Two because they went on endlessly about the Blitz. A pub in Kettering, Northamptonshire sang in Brexitmas with a chorus of ‘We’ll Meet Again’ even though no one there looked over the age of seventy five, and therefore able to remember saturation bombing of the Midlands by the German Lufftwaffe. It also can’t be after 1972, because that’s when the UK passed legislation to join the European Community. 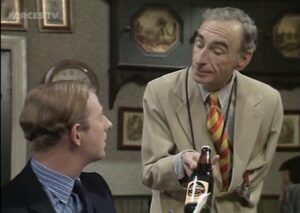 The Prime Minister dodges his comeuppance because in the minds of the proverbial key opinion formers he has the magic touch, a way to communicate with the lumpenproletariat based on years of appearances on topically-based television comedy panel shows. Memories of TV celebrity are everything in the shattered mirror of British culture and politics. I wish I were being sarcastic but it’s literally and unironically true. The greatest footprint is from sometime before 1972 but after Cliff and the Shadows. It’s left to light entertainers and thespians, eager for a gig with Big Finish (the audio adventures of Timothy Lea, anyone?) to address the crowd, to collapse the fourth wall.

England, not so much a family with the wrong members in control as a small bistro with a one-armed Irish dishwasher on dodgy residency papers, and oh no! – There goes another tapas tureen. We are all Robin Tripp now.