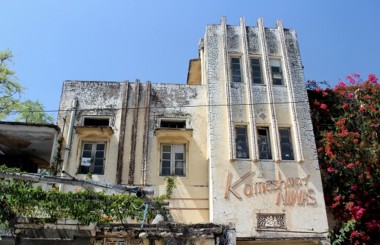 In florid cursive lettering, above a relief of Ram and Sita reclining, the sign reads ‘Kameshwar Niwas’ (literally “House of the Lord of Love”). Like the ‘Eros’ cinema in Mumbai’s historic Oval district – which is being considered for UNESCO World Heritage site status in recognition of the area’s exceptional Victorian and Art Deco buildings – the sentiment behind the House of the Lord of Love couldn’t be more Indian. Yet the style of the three storey apartment building, from its sign, to its metal-framed windows and the bold air stream geometric lines on its roof, is pure Art Deco.

It could easily be a dilapidated motel at the seedier end of Sunset Boulevard in LA. Or at the northern tip of the San Francisco peninsular near the Sutro Baths, where elderly Chinese American couple retire to mauve, ox-blood red, sand and egg-yolk coloured concrete bungalows, with stained glass depictions of the setting Sun on the front door.

The surprise is round the corner, on the summit of the roof where – were it an ocean liner, or the Empire State building – air ships could once have been tethered. When viewed from the street, nestled behind bougainvillea tree branches, again it reads “Kameshwar Niwas” but this time in Hindi. Though an Indian script, it’s rendered in the same jaunty, cursive letters as the English sign over the front entrance. This is the same kind of lettering found outside cheery English bungalows of the Thirties – in Port Sunlight near Wirral, and Peacehaven in Sussex – Modernist dwellings built on a human scale between the Occident’s two World Wars, homes fit for returning heroes.

Nowadays in Great Britain, similar signs outside bungalows built in the inter-War years – houses called things like ‘Dun’Roamin’ – evoke images of retirement homes and ceramic shire horses on the mantelpiece. At the time that they were built this is what soldiers who survived the Western Front were looking forward to coming home to, after the hostilities abroad. Following years of mechanised carnage, privacy, practicality and affordability – homes built with modern materials and modern design sensibility, but with traditional craft – were the same thing as luxury.

Intellectuals and exponents of Modernism like Erich Mendelsohn, architect of the De La Warr Pavilion – a marvel of expressionist design close to Peacehaven, further down England’s Sussex coast in Bexhill-on-Sea – regarded Art Deco and its associations with decadence, ornament and glamour as distractions, frippery. Yet in these new English towns built in the Twenties and Thirties, a commercialised, folksy, popular version of Modernism resonated with the sentimental, fragile sense of optimism that people, with the Great War behind them, felt about the future ahead.

Quite by coincidence, Hindu and Sikh soldiers who fought in both World Wars were cremated near Peacehaven, at Patcham. A Chattri stands in the vast hilly landscape of chalk Downs, a memorial to their sacrifice which is beloved by walkers and mountain bikers, a place of tranquillity and rest overlooking seaside towns and what were once little fishing villages – Brighton, Eastbourne, Bexhill, Hastings – in the beautiful stretch of downland that has seen more military invasions than almost any other coastline in Europe. William the Conqueror landed near Hastings in 1066. Fascist Germany planned to land troops and armoured vehicles between Seaford and Shoreham in September 1940, and would have parachuted advance forces behind the Downs to take out electricity pylons and other essential infrastructure. Britain responded by building the GHQ line of defences, but Hitler went cold on Operation Sealion and concentrated instead on aerial bombardment and the Blitz.

I’ve lived by the Sussex Downs for most of my life. To me, it seems to be a peaceful place, somewhere that must never be spoiled by human aggression again; a solid chunk of rock that speaks more evocatively than the White Cliffs of Dover. Its says quietly, without yelling or insisting, “stop.” Kipling, who lived nearby at Rottingdean called the hills “Our blunt, bow-headed whale-backed Downs.”

Unlike their English counterparts, Indian soldiers who survived fighting for King and Empire had none of the luxury to look forward to on return to the sub-continent, which wouldn’t be liberated till 1947. While Mumbai’s cinemas were, like their American counterparts, built as people’s palaces, Kameshwar Niwas and the other Art Deco apartment buildings in the Raja Park area were built for successful Indian middle class merchants. History is repeating itself in this part of Jaipur: Punjabi and Sindhi refugees settled here in the turmoil of Partition and have built a business community of intersecting streets that has become Jaipur’s garment district.

The business community in Jaipur and neighbouring Jodhpur also did well in the last days of British rule, but their story has been subsumed in the overall narrative of the Independence struggle which has focused – understandably and rightly – on the poverty of the masses. In the process of prioritising folk memories, the elegant, affordable luxury of India’s middle classes in the Thirties and Forties has also been forgotten. As has the opulence and Modern ambitions of Maharajah Umaid Singh, who founded the Jodphur Flying Club in the 1920s, which went on to be used as an RAF airfield in Rajasthan during World War Two and, after independence, the Indian Air Force.

Now that India is widely trumpeted as an economic success, this heritage of world class architecture from the Twenties through to the Fifties – sadly neglected – points to a different way that Indians once created memorials to their success. It also suggests a way that India could conceive modernity and the future, beyond an ability to hit “like” on a Facebook status update, by importing the best of everything.

It’s a surprise to find an Art Deco building like this outside an obviously international city like Mumbai. But why is it a surprise that – more than sixty years ago – Indians with money and taste wanted the best that life had to offer, which included the best of international design? Most people’s reaction tells a story in itself. Kameshwar Niwas seems so American. But when it was built ‘American’ meant the same thing as ‘modern’.

Had Hindi cinema many child stars in the years immediately after independence, you can easily imagine a grand dame of the peacock screen, an aged Sulochana in huge sunglasses and a shawl, tottering out of Kameshwar Niwas every now and again to tend to her roses and chat to people queuing at the bakery next door about how she used to be India’s Elizabeth Taylor. No matter how often the postman chose to ring, no one – and certainly not India’s Lana Turner – will answer the door today. Kameshwar Niwas is uninhabited and used for storage. The owner, Ashok Sukhija, is proprietor of the sweet shop opposite. He acquired the sixty-five year old building from the original owner’s two sons, and has considered repainting it.

Its limestone and timber interior has declined slowly over the decades while, outside, Jaipur and India’s fortunes have burgeoned. Mr Sukhija is thinking about demolishing Kameshwar Niwas in the next four years, so we may have discovered it just in time and this blog post may be its eulogy.

Happening upon this and the other beautiful Art Deco buildings in Jaipur’s garment district is as unexpected as the moment Fred Astaire reveals the piano on the back seat of his plane to Ginger Rogers in their first screen pairing, the 1933 RKO picture ‘Flying Down to Rio’.

It could be argued that saving Jaipur’s Kameshwar Niwas is as impractical as keeping a piano in a biplane. I’d add that it’s every bit as delightful, too.

Though Deco was an international style that incorporated everything from aerodynamic design to African art, I am hard-pressed to think of many buildings that incorporate Asian motifs as well. I can think of a couple in San Francisco’s Chinatown, built after the 1906 earthquake, but other than that I’m stumped (though happy to be corrected if anyone can think of some). Surely the delight of the building’s design and sentiment is as much part of Indian and World architectural heritage as a Rajput fort? I really hope something can be done to salvage Kameshwar Niwas and restore it to its original elegance and splendour.

Flying Down to Jaipur