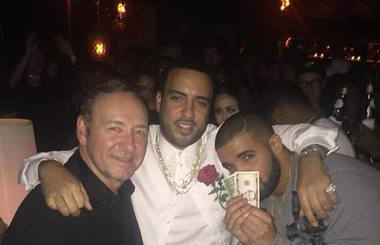 Driving in my car,
Digging Shalamar,
I like chasing twinks
So I hit the Old Vic bar.
Now my career’s tanked,
With Pee Wee I am ranked
Busting out the closet like I’m shovellin outta Shawshank.

Singer calls me up, he’s all “Spacey, go on stealth.
Implicating paedophiles could do harm to your health.”
Got to get them dollars,
Up until I’m collared,
Not grass up the Windsors,
And hang on to my honours.

(Oh the grand Old Duke of York,
He had ten thousand men,
Ghislaine pimped kids to half of the Hill,
then she pimped them out again,
Oi!)

[Sample of ‘Walk On the Wild Side’]

(Maxwell…
Took a walk off the broadside.
Is that him in the water?
No, that’s Gibraltar).

Alex Jones can use me,
Milo can accuse me,
But I’m kicking back in Abu Dhabi clogging up jakuzzis.

Homies have proclivities,
For treasonous activities,
Dossiers of kompromat and golden showers overseas.

Tabloids wanna harm me,
Inmates try to carve me,
My card’s as safe as houses cus I’m bunking up with Harvey.

Gay pride on a roll,
Bon mots that are droll,
Cruising Sunset Boulevard like Epstein on parole.

“Basically I’m the best rapper out there”